“Xtabentún has concentrated anisette from beginning to end; finishes with a thick, rich honey. Chocolaty and warm, with a minty middle.”

A Mayan legend of two women, Xtabay and Utz-Colel, both with a very different heart and spirit. Xtabay was a wilder, free spirit, full of sass and audacity. Utz-Colel was cold hearted, cruel and selfish.

On the grave of Xtabay after her death, a beautiful, new sweet smelling wildflower grew which the Maya named “Xtabentún” in honor of Xtabay; nothing grew on the grave of Utz-Colel. Xtabentún is a lovely, delicate white flower found in the Yucatán.

The Maya began to produce a ceremonial beverage from the flower’s seeds into sweet nectar called Blaché.

A Tribute to the Xtabay

In the Mayan language, xtabentún means “vines growing on stone.” This is a reference to the perennial Xtabentún climbing vine with white flowers.

The seeds of the vine contain ergine which is said to have hallucinogenic properties. It is believed Blaché is the original version of the Xtabentún liqueur made from corn and the plant’s seeds.

The Spaniard conquistadors were not too fond of Blaché, thus the Mayans introduced the non-hallucinogenic version known today as Xtabentún, containing honey and wild green anise. 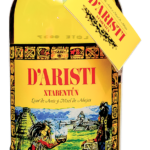 Combine all ingredients in a cocktail
shaker filled with ice, shake Pour into a large glass
Garnish with drops of tamarind purée and lime slices
Recipe courtesy of La Cantina at the Maroma Resort and Spa