Every bottle is individually numbered and waxed by hand

The whisky shows fruitiness coated by a mild, balanced and very clear smokiness.

The whisky uncovers the soft balanced notes of the barley mash-bill, the chocolate malt becomes more evident and the smoke and peat a bit rounder. The fruitiness matures a fraction and moves to ripe apples and hints of licorice.

This whisky is named Tycho’s Star as a tribute to the most famous islander yet, the astronomer Tycho Brahe (pronounced Brah-ee) (1546-1601).

The name Tycho’s Star refers to the supernova that Tycho Brahe observed in the asterism Cassiopeia 1572. He called it “De Nova Stella” and made a term of the expression Nova, that nowadays are used to describe new stars.

In the research facilities near the castle Uraniborg, he had an observatory, medicinal gardens and laboratories. Almost 100 people worked within the compound. The astronomical measurement that was conducted on Hven 450 years ago are still astonishingly accurate and has been the basis for the heliocentric world view we have today.

In 1946, the Swedish crown prince Gustav Adolf inaugurated the famous statue of Tycho Brahe situated on Hven and, in 1999, the 50-metrictonne heavy granite sculpture that pride the entrance to the distillery was inaugurated, this one is baptised “Tycho’s Star.” Tycho Brahe is also known for his artificial copper nose, as he lost his own in a sword duel over a mathematical formula. 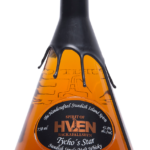