The North British distillery was established in 1885. The founders of the distillery (near Edinburgh) were a group of local businessmen, including one Andrew Usher, who was one of the first merchants to market a blended whisky. Operations at the North British grain distillery started in 1887.

Over the years the distillery grew into Scotland’s second largest grain whisky distillery with an annual production capacity of circa 64,000,000 litres of alcohol per year. 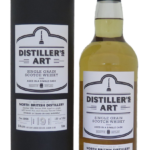