Blair Athol is one of the oldest distilleries in Scotland, founded in 1798 by John Stewart and Robert Robertson near the picturesque little town of Pitlochry.

The young Blair Athol distillery was closed not long afterwards, however – until it was revived again by John Robertson in 1825/’26. It ran continuously for a decade after that.

The Blair Athol distillery was finally closed in 1932, before being purchased by Arthur Bell & Sons Ltd. in 1933. Although Arthur Bell owned Blair Athol, they didn’t actually use it until it was fully rebuilt in 1949. 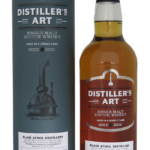