One of the original farm distilleries of Speyside, Macallan became legal in 1824 when Alexander Reid obtained (or was persuaded to obtain) one of the new licenses issued after the passing of the 1823 Excise Act.

In 1868, James Stuart took the lease and rebuilt the plant. His ownership ended in 1892, when he sold Macallan to one of the giants of Victorian distilling, Roderick Kemp, who had previously owned Talisker (although he never owned both distilleries at the same time). Kemp’s ancestors – in particular the Shiach family – retained ownership until the 1996 takeover by Highland Distillers (now Edrington).

The plant has continually been expanded from its original wooden shed with two stills. It was increased to five stills (two wash, three spirit) in 1954 and then more significantly in 1965 when a new stillhouse with seven stills was built. This process continued throughout the 1970s with the total number of stills reaching 21 by 1975. 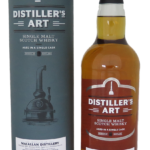