William Grant & Sons built its Girvan distillery after a strange wrangle between the Grant family and DCL. According to legend, Grant’s had decided to run a TV ad for its Standfast brand on commercial television. DCL took umbrage at this show of crass commercialism and promptly said that it would cut off Grant’s supply of grain whisky.

As this would have seriously affected the growth of Standfast, the family did what they always have done: built a new distillery from scratch – and quickly. Girvan on the Clyde coast was chosen because of the size of the site and encouragement given by the local council for large-scale investment in the area.

In 1963, under the eye of the young Charles Grant Gordon, the distillery was built, commissioned and in production within nine months. In an echo of his great-grandfather William Grant at Glenfiddich, the first spirit ran on Christmas Day. The cutting off of grain could also be seen as giving the impetus for the launch of Glenfiddich Pure Malt the same year. 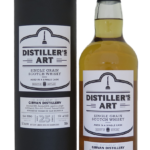